A guide to get started

At the core of Cilium is eBPF, which enables the dynamic insertion of control logic within Linux itself. Because eBPF runs inside the Linux kernel, Cilium security policies can be applied and updated without any changes to the application code or container configuration.

A Hubble and Cilium deployment includes the following components running in the cluster: 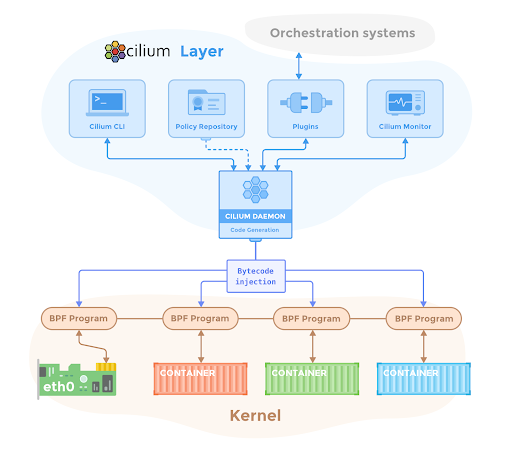 Here is a high-level description of Cilium components:

The cilium-agent component runs on every node in the cluster. It accepts the configuration via APIs or Kubernetes, which describes requirements for networking, network policies, load balancing, visibility, and monitoring.

The agent waits for events from the orchestration system (i.e., Kubernetes) to indicate when workloads or containers start or stop. It manages eBPF programs that allow the Linux kernel to control network access in and out of the containers.

The CLI client is a command-line tool installed alongside the Cilium agent on the same node, interacting with the agent’s REST API. The CLI enables the inspection of the local agent’s state and status. It also offers tools to access and validate the state of eBPF maps directly.

The operator handles tasks that require one-time handling for the whole cluster instead of for every node. The Cilium operator is not critical for making network policy decisions or forwarding – clusters can generally function when the operator becomes unavailable.

Kubernetes invokes the cilium-cni plugin when it schedules or terminates a pod on the node. The plugin interacts with the node’s Cilium API to trigger the right datapath configurations for the pod’s networking, policy, and load balancing needs.

The Hubble server runs on every node, retrieving visibility based on eBPF from Cilium. The server is built into the Cilium agent to enable low overhead and high performance, providing a gRPC service that retrieves Prometheus metrics and flows. Hubble components include:

This component is a standalone relay that maintains awareness of every running Hubble server. It provides visibility throughout the cluster by connecting to each server’s gRPC API and creating an API representing all the servers in the cluster.

This command-line tool can connect to the Hubble relay’s gRPC API or a local server to retrieve flows.

This UI component uses the visibility from the Hubble relay to provide graphical service dependencies and map connectivity.

What does Cilium provide in a Kubernetes cluster?

Cilium offers capabilities based on the CNI (container networking interface) plugin. The plugin is compatible with all existing kube proxy models and provides an identity-driven implementation of the network policy resource in Kubernetes. This resource decouples the connections between Layer 3 and Layer 4 pods.

Kubernetes containers run in units known as pods – each pod has one or multiple containers accessible via a single IP address. In Cilium, pods get their IP addresses from the Linux node’s prefix. Cilium allows you to define network security policies to restrict pod communication and ensure pods can only talk to pods they must access.

Kubernetes abstracts services to enable the load balancing traffic between the pods in a network. This abstraction enables pods to reach other pods via a virtual IP address representing each service – there is no need to know every single pod.

If you don’t have Cilium, you can install the kube proxy on every node to monitor the removal and addition of services and endpoints from the kube-master. It can also manage iptables and enforce network traffic policies. Without Cilium, the kube proxy routes all inbound and outbound pod traffic to a port and node with a pod that proves the service.

If you implement ClusterIP, Cilium will behave the same way as the kube proxy – it monitors the removal and additions of services but updates each node’s eBPF maps instead of using iptables. This approach is more secure and efficient.

Cilium announced the general availability of Cilium 1.12 in July 2022. The release includes the following new features:

Getting started with Cilium using Istio

The Cilium Istio integration enables Cilium to enforce Layer 7 HTTP network policies for traffic protected with mTLS in Istio sidecar proxies. You can also deploy Istio without integrating Cilium if you run a standard istioctl version. In such cases, Cilium enforces Layer 7 policies outside the Istio sidecar proxy, although this only works if you don’t use mTLS.

Cilium is installable on any cluster – you install Cilium in the Kubernetes cluster that the current kubectl context points to:

Ensure that Cilium is running in the cluster before continuing to download the Cilium-enhanced istioctl version (1.10.6-1):

Now you can add a namespace label that instructs Istio to inject an Envoy sidecar proxy automatically during your application’s deployment:

Istio and Cilium are now deployed.

The Cilium add-on module for Gloo Mesh brings together Istio and Cilium for a more cohesive, secure and performant Layer 2 – Layer 7 application networking architecture. This paves the way for a smoother, simplified enterprise cloud journey.

Next generation of cloud-native application networking

Gloo Mesh supports Cilium and 3rd-party CNI implementations in a batteries included by pluggable manner. This approach gives our customers the flexibility they need on their cloud journey.

Enterprise support for Istio in production