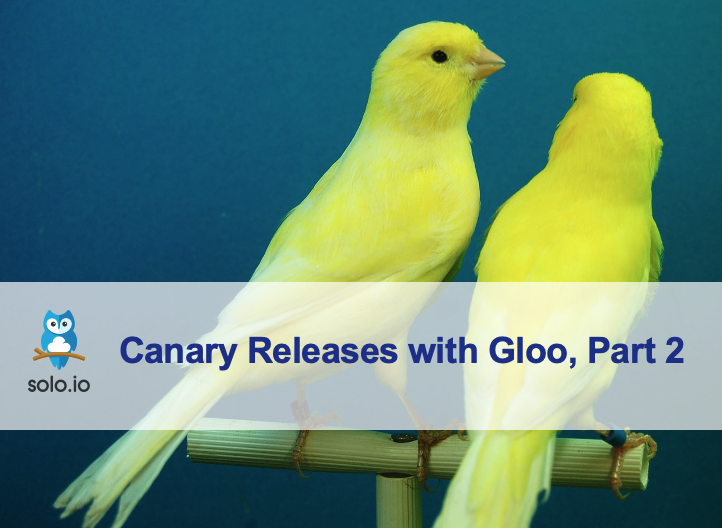 In the last part, we looked at how you can use Gloo to set up a two-phased approach to canary testing and rolling out new versions of your services.

Now we’re going to look at how we can improve upon that workflow design, so we can scale across many services owned by many teams, while taking into account how responsibilities may be separated across different roles in the organization, and making sure the platform gracefully handles configuration errors.

As we saw in the last post, Gloo uses the VirtualService to manage the routes for a particular domain. We were able to execute our two-phased upgrade workflow in Gloo by modifying the routes on the virtual service object.

Before, we executed the workflow for a single service called echo. Now, we are going to introduce a second service foxtrot, owned by a different team, and consider how this workflow might scale to multiple teams.

In particular, we’re going to look for an approach that satisfies the following key goals:

The simple approach to scaling would be to have a single VirtualService, and manage all the routes for the echo and foxtrot services with the same resource.

Right away, we can see a problem. Since all our routes are controlled with a single object, we either need to grant write permissions to that object to both teams, or we need all the rights to go through a central admin team. The latter approach would most likely be the lesser of two evils, and you would place an increasingly large burden on your central admin team as the number of discrete development teams grows.

The first alternative we might consider is to model each service with different domains, so that the routes are managed on different objects. For example, if our primary domain was example.com, we could have a virtual service for each subdomain: echo.example.com and foxtrot.example.com.

Now, we can more cleanly decentralize the ownership of the routes, across the two services, by giving each team ownership over their own virtual services. Gloo can easily watch both namespaces, so you can store the virtual service with the other resources owned by each team.

However, in some organizations (as is the case for the user who reached out to me), the ownership of the domains and routes is separated — with a dev ops team responsible for things like DNS and certificate management, and a dev team responsible for specific routes. That means there would still be shared ownership of these two virtual services, just not shared across development teams.

For such an organization, a better approach would be to have an admin team own the root virtual service, and for that team to be able to delegate ownership of one or more routes.

This sounds like the most satisfactory approach, so now let’s see how this works in Gloo.

Setting up your working directory

To make it easier to follow this guide, I’d recommend running the following steps to get all the resources referenced into your working directory. All of the kubectl commands are assuming this working directory:

First, we will deploy echo to the echo namespace:

And we will deploy foxtrot to the foxtrot namespace:

We should wait for the pods in the echo and foxtrot namespaces are ready.

Model the services as upstreams in Gloo

Let’s model echo as an Upstream destination in Gloo:

And let’s do the same for foxtrot, modeling it as an Upstream:

And deploying it to the cluster:

Now, let’s create a route table containing the route to the echo upstream:

And let’s create the route table for foxtrot:

Wire it up with a virtual service

Finally, we can wire up both services to a particular domain (in this case, *) by creating a virtual service. In our scenario, we are assuming a central ops team owns the domain, so we’ll keep this config in the gloo-system namespace.

At this point, we should be able to send requests to both services through Gloo:

Now, the echo or foxtrot team can run the two-phased workflow on their service by making edits to their corresponding route table. We’re going to impersonate the foxtrot team and start rolling out v2.

For Phase 1, we need to deploy v2 of the foxtrot service, and then update the route table to send requests including the header stage: canary to v2.

We can deploy foxtrot-v2 and wait for it to be deployed:
kubectl apply -f foxtrot-v2.yaml

Wait until the pods in namespace ‘foxtrot’ are ready. Use kubectl get pods -n foxtrot to check the status.

Then we need to update the routes so we can start testing foxtrot v2:

Now we can test to make sure we can send requests to foxtrot v2. Our other routes should continue to behave as before:

The last request is now sent to v2 because the canary header was provided.

Now we can switch to phase 2 by updating the foxtrot route table with weighted destinations:

We expect the routes to continue to behave as before.

While the foxtrot team is rolling out v2 of foxtrot, let’s say the echo team is ready to start testing a new version of the echo service.

We can deploy echo-v2 and wait for it to be deployed:

Wait until the pods in namespace ‘echo’ are ready. Use kubectl get pods -n echo to check the status.

Then we need to update the routes so we can start testing echo v2:

Now we should be able to test v2 of either the echo or foxtrot service, since each team is in the middle of a canary rollout.

As we can now see, using route tables allows us to scale our canary rollout to multiple development teams, without needing to give teams ownership over their own domain configuration. Teams can manage their own canary rollouts in parallel, without needing to coordinate. At least, that’s true until someone starts authoring invalid configuration. We’ll see that Gloo’s default behavior in response to invalid configuration isn’t desirable for our use case; however, we can resolve that and change the behavior with a simple settings change.

Default Gloo behavior when there is invalid configuration

Typically, when Gloo encounters invalid configuration, it tries to continue serving the last known good configuration to Envoy. That way, the mistake won’t cause working routes to get removed, and as soon as the configuration is repaired, Envoy will start receiving updates again. This isn’t foolproof – it only works as long as Gloo and Envoy have that last known configuration in memory, and won’t survive pod restarts. But it preserves decent degradation semantics in the event of a problem, and is often the ideal behavior for a particular use case. Let’s see what that looks like in our use case. Let’s simulate the echo team writing configuration that is invalid, by referencing an upstream destination that doesn’t exist.

In parallel, the foxtrot team is trying to finish phase 2 and adjusts the weights to start sending 100% of traffic to the v2 destination:

Let’s deploy that to the cluster:

Now, we can tell there’s an error by running glooctl check:

If we test the routes, we’ll see the following behavior:

As we can see, there is an error in the overall proxy config, so Gloo is continuing to serve Envoy the last known good configuration. This means the foxtrot team’s change to set the weight to v2 did not apply. The foxtrot team is blocked, pending the echo team fixing their configuration.

When considering an API gateway that is used across a large development organization, with many independent teams, we would consider it a red flag if one team’s mistake could block another team’s progress. Fortunately, Gloo has a feature called route replacement that changes the proxy behavior and addresses this concern.

Changing the behavior around invalid configuration

Let’s create a file called settings-patch.yaml that contains the following patch for our Gloo settings:

This will change the behavior of Gloo, so that in the event of bad configuration, it replaces the routes that are affected by the mistake with a 404 and error message as a direct response. In our case, the new echo route table is invalid, so the route is replaced; however, Gloo will update Envoy with the routes from the foxtrot route table, since that object is valid. It will also continue to serve the old echo route.

We can apply the patch with the following command:

Now if we run the same test as above, we’ll see the following results:

Now that we’ve setup Gloo to replace invalid routes and preserve valid ones, the foxtrot team can finish their rollout.

Since all the traffic has been shifted to v2, we can now clean up the routes:

Let’s deploy it with the following command:

And we can delete the v1 foxtrot deployment, which is no longer serving any traffic.

Finally, let’s check to make sure foxtrot is still healthy:

We can also revert the invalid echo config, to unblock the echo team. We’ll just revert to the old route table:

Now, we’ll see the error is cleared up by running glooctl check:

And we’ll see the routes working as expected again for echo:

In this post, we looked at extending our two-phased canary rollout workflow. We scaled it across multiple dev teams by delegating different route tables to different teams. With delegation, we achieved a cleaner separation of responsibilities for our dev ops team, who owns the domain, and for our dev teams, who own different routes. Finally, it was easy to customize the behavior in Gloo to ensure the two teams could operate in parallel without needing to coordinate, and without risk that one team will block another by writing invalid configuration.

Special thanks to Ievgenii Shepeliuk for providing feedback on part 1 and sharing how route tables are used at his organization. For a deeper look at how Gloo is used at New Age Solutions, check out our case study.

Get Involved in the Gloo Community

Gloo has a large and growing community of open source users, in addition to an enterprise customer base. To learn more about Gloo:

Rick Ducott is the Director of Engineering at Solo.io responsible for the day to day operations of the engineering across open source and enterprise products. You can find him online @Ducott and speaking at our online meetups and webinars.