What is a Canary Release?

Canary release is an approach for safer application delivery, specifically the delivery of new software to end users without disrupting or interrupting their experience. Techniques like Canary and Blue/Green fall within the practice of Progressive Delivery which allow organizations to better manage their risk by slowing down and controlling how many end users have access to the new software as it is deployed to production.

API or Edge Gateways provide a point of control to set up routes to manage, secure and observe traffic coming from external clients and end users to backend applications services.

Gloo API Gateway has a flexible deployment architecture leveraging Envoy as the edge proxy to facilitate simple to complex canary release use cases for diverse application portfolios. At a high level, the workflow for Canary Release with Gloo looks like the diagram below. Gloo’s flexibility allows organizations to automate the release process, integrate it with other tools, scale across multiple teams, and more. 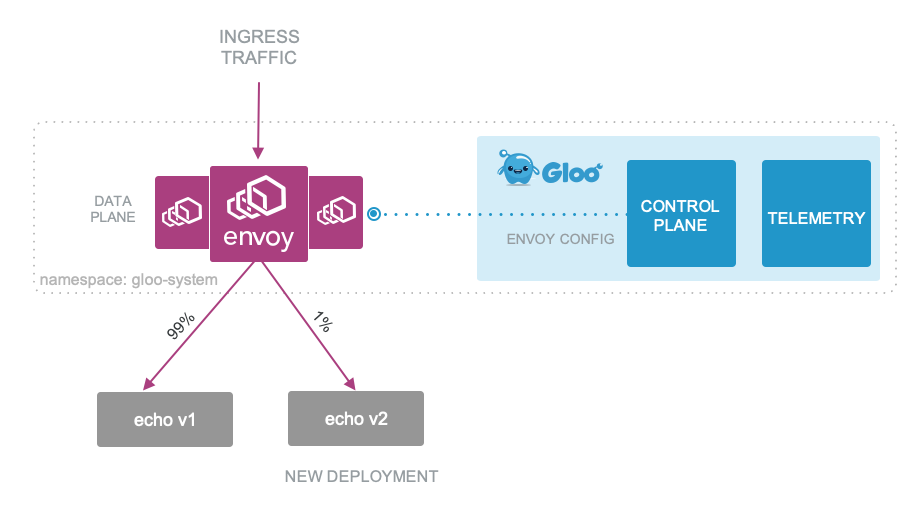 Get started with canary releases with two options for a step by step tutorial using Kubernetes, Gloo API Gateway, and ecosystem tools including; instructions to set up your own demo environment and a hosted lab to try the workflow in your browser.

This three part series uses a combination of blog posts and publicly accessible demo code to guide you through setting up the environment and running different canary release scenarios.

Part 1: A two-phased canary roll out workflow starts by shifting a small subset of traffic to the new version to safely perform tests and verify correctness before starting to progressively shift more traffic while monitoring the new version under load and eventually decommissioning the old version of software.

All resources for Part 1 of the tutorial are included in the blog post and GitHub repo.

Part 1 of the tutorial outlines how to:

Part 2: Build on part 1 to scale the canary release workflow across multiple services owned by different teams with the ability to gracefully handle configuration errors. This is an important consideration as responsibilities are often spread across different roles within a team or organization on a shared application platform. The goal of this tutorial is to design a workflow that allows teams to operate in parallel, remove bottlenecks, and to do that while mitigating the risk of invalid configurations of one team blocking another team’s progress.

All resources for Part 2 of the tutorial are included in the blog post and GitHub repo.

Part 2 of the tutorial outlines how to:

All resources for Part 3 of the tutorial are included in the blog post and GitHub repo.

Part 3 of the tutorial outlines how to:

For a guided experience in canary releases using Gloo API Gateway without having to install or configure any software, a hosted lab environment is available on Katacoda. Start with the canary release tutorial and then try the many different courses on traffic management, security and more. Start the tutorial

Learn more about Gloo API Gateway and the canary release use case to get started in evolving to progressive delivery. Read the docs for more detail and check out the integration to Flagger by Weaveworks.

Watch this talk and demo